The Shirtwaist Dress from Gertie's New Book for Better Sewing

My latest dress is the Shirtwaist Dress from Gertie's New Book for Better Sewing.  The fabric is 100% cotton. 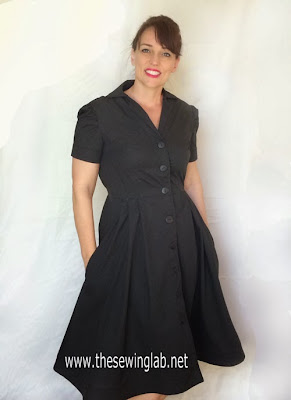 The dress has a collar - which I was a little apprehensive about sewing.  It is actually the first time I have sewn a collar.  It isn't perfect, but I liked trying a new technique. 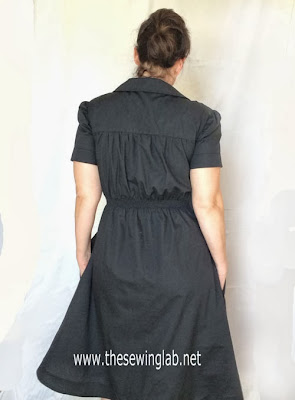 The front has pleats, but the back has a few rows of elastic thread sewn at the waist to make a snug but stretchy fit. My favorite part is the pockets.  I love having pockets.  I couldn't keep my hands out of them, even for these photos.

I like the buttons down the front, but I used snaps instead because the buttonhole feature on my sewing machine hasn't been working lately.  I think it is time to get my machine serviced, but I don't want to be without it.  I sewed a button on the front of the dress to make it look like there are buttonholes, but it is all trickery. 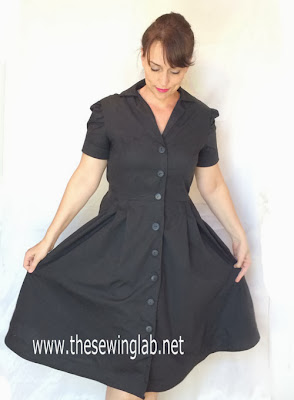 Here is Gertie's version. I like the flowered fabric she uses.
I deviated from the pattern in one way- I sewed synthetic horsehair around the hem when it didn't call for it.  I don't think it was a good move.  Eventually, I'll take it out, but I didn't have time to redo anything since I was in a bit of a time crunch.  I sewed the dress to wear to a funeral.  My grandma passed away and she was a gifted seamstress and I think sewing the dress in her honor felt good.  She probably even had a dress like this in the 50s.

My grandma was born in 1916 and one of my favorite stories she told about her childhood was when she was a little girl, she wanted a fur coat for her doll.  Since my farming family had more talent and resourcefulness than money, going out and buying a little fur wasn't an option.  So, she worked with her grandma to catch some mice at the farm and skin them and process the hide.   She sewed a few of the mouse skins together and voila - fur coat.  I know, I know.  It has a definite EW factor to it, but I still love the story.  It also shows how it is so typical of my family to allow its members to explore their creativity and chase their happiness. Even if in chasing that happiness a few mice lose their lives.  Or something.

My Grandma was funny and capable and strong.  She was kind and generous and gave time and money to charities.  She made the best apple pie.  Ever.  She liked BLT sandwiches.  She could sew, quilt, cook and garden.  She canned vegetables and fruit.  She cheated at cards.  In the 80's she worked as an inspector in a meat packing plant, which was previously largely male-dominated.  The extra income saved our family's farm.  She stopped going to school in the 8th grade, but got her GED in her 70s.  She was smart. She washed plastic bags and used them over and over.  She dried them over the kitchen faucet and I'd usually see one drying when I was in her kitchen.  She liked watching PBS.  Every Christmas, she kept a bottle of Jagermeister in the freezer and invited people to have a taste of it with her.  She was a wonderful artist and could do pencil drawings and paint.  She was a fantastic hostess who made everyone feel comfortable. I don't recall her ever raising her voice in anger.  She learned how to use a computer when she was in her 80's and loved exchanging e-mails with her family.  She had a Facebook account. The last time I saw her, she hugged me and told me I'd always been a good girl (she had clearly forgotten my entire adolescence, but she was otherwise sharp until the end). The world isn't as nice of a place without her. I am lucky to have known her and I will miss her.

Now for the pattern review.
The good: I like the pattern itself.  The elastic on the back makes the dress fit close, but makes breathing possible.  I love the pockets  I like the row of buttons down the front.

The so-so: I think I would have liked gathers or pleats in the back of the dress, as well.  If I make this again, I think I'll add them.

The complaints: Once again, I am not a fan of how the pattern pieces are all drawn on the same pieces of paper.  The pieces are overlapping and it is sometimes difficult to follow the right lines.  Not impossible, but kind of a pain.

Here is Gertie's book (which I highly recommend).