I love lapped zippers.  The first time I learned how to put one in, it was taking Susan Kjalje's couture dress class from Craftsy.  She does a great job teaching the method. But I shamefully admit that I loved them partly because it allowed me to avoid invisible zippers or any machine installation.  Even though I Googled tutorials on them, it never turned out for me. This is the part I was missing:  The Universal Invisible Zipper Foot

.  It only costs a few dollars from Amazon*.  The package is bilingual.  Pied pour fermeture à glissière invisible.  I feel fancier already. 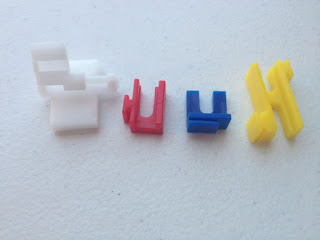 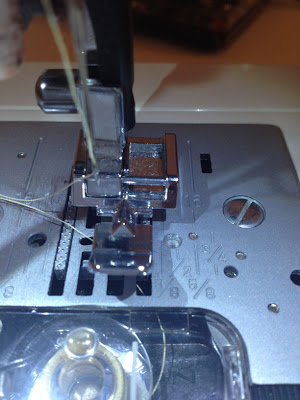 So I used my regular zipper foot with terrible results.  I couldn't stitch close enough to the edge of the zipper with this foot.  And the fabric slipped all over the place.  Bad. 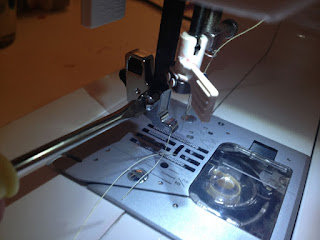 Then I had a revelation. And I know that this is likely obvious to so many people, but I had no idea that ankle came off of the shank.  I didn't know it was called an ankle.  I didn't know it was a shank. The only shanks I dealt with were in the kitchen with rosemary and garlic.  I have been sewing for two years and never really read the sewing machine manual or took lessons.  So, the first step is to unscrew the ankle and slip it off the shank. 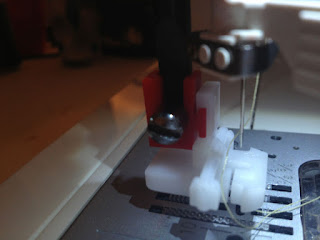 Next slip a new ankle on the newly naked shank. Those three colored plastic pieces are ankles.  Choose one and slip it on the shank as far as it will go, then screw it on.  Here is how you know which one:
After putting the ankle on the shank and tightening the screw, slip the foot into the notch on the ankle.  Voilà. You can adjust the foot from left to right to get it so that the needle will sew through the hole in the foot.

Next, take out the zipper and iron it so that the teeth are open.

The other very helpful thing I found out was to sew a basting stitch where you would like the seam to be. Do this for both sides. This really saved me.  It provides a great guideline when sewing.

Sew so that the needle is just beside the teeth.  There are two tracks on the foot, so you will be able to position it, no matter which side you are sewing. 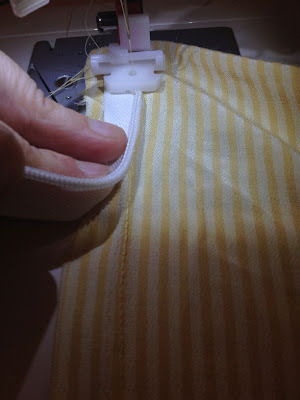 Inexplicably, in this photo I am sewing with the fabric to the right side of the needle, which I never do unless I am taking photos for a tutorial and have lost my mind.

Now that one edge is finished, zip up the zipper and mark any seams or other points you need to match.  For example, I marked the seam between the waist and the bodice on the zipper tape so that when I pin it to the other side, I know where to position it.

Pin second side in the same way.  Although, technically, I didn't pin it.  I should have.  I swear.  But I did use the seam marks as a guideline to put in the second side.  I also had a basting stitch to follow as a guideline.

The zipper was flawless the first time I put it in without any hand-sewing. I had no idea it was this easy and quick. 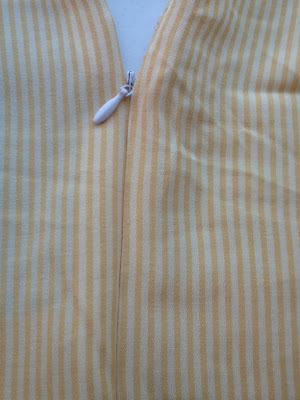 Here is the finished zipper in a dress I am working on.

Next steps: maybe read my sewing machine manual... I could have saved some frustration about zipper installation.
Posted by Cherie at 9:48 PM