Class Review: Design Your Own Handbag by Craftsy

I was so excited to take the Design Your Own Handbag from Craftsy.  And I so wanted to love it.  I did love the some parts of it and I think the instructor was knowledgeable and likeable, but I had some serious frustration with the way the class was structured.  But, on to that later... 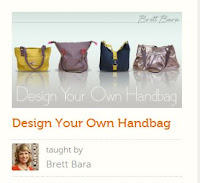 First things first.  Here is the bag that I made as a result of the class.  Just another black bag that goes with everything because I can't be bothered to change purses with my outfits.  I want to sometimes, but it turns out that I just have a one bag and use it until it is worn out, then I have another bag.  I am a serial bag-ruiner. 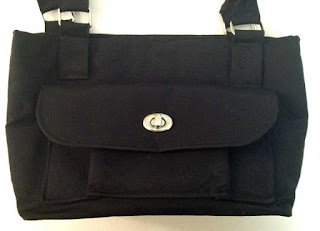 One zipper pocket on the outside with the lining peeking through. 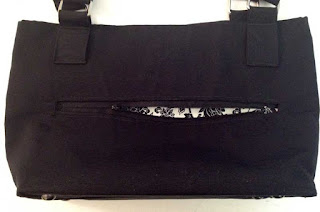 This is the inside of the purse.  It has four pockets inside.  That is actually my favorite part.  I hate not having enough pockets inside a purse.  Things must be sectioned off and in their own space.  If it's not a right angle, it is a wrong angle. Or something. 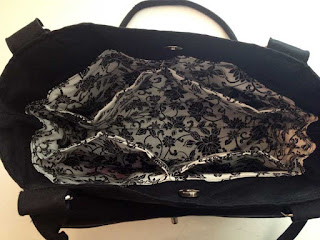 The bottom has feet.  The inside of the straps has a broken rubber jump rope that was headed for the recycle bin. I felt so green and all granola-crunchy good for doing it. 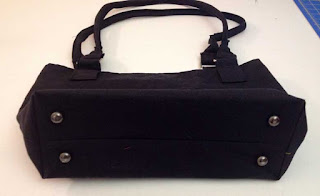 Now for the nitty-gritty: the way the class was structured makes this a bag I would never use.  It was  presented in a way that had me watching too many steps out of order.  For example, the construction of the bag itself was placed before the addition of pockets.  I managed to avoid that pitfall, but got in trouble when I didn't place the magnetic closures on before I put together the bag.  And I ended up putting the feet on at an inconvenient step.  Then, the handles were awkward to put on.  I ended up having to take some things apart and/or make adjustments that make this look like a very home-made bag.   For example, you can't see in the photos that I had to reinforce the bag in an obvious way where the clasp goes in.  It looks pretty bad.

Overall, I liked the sections of the class, I liked the instructor and I did learn some things about basic bag making.  I just wish that the class followed a logical order from steps a-z so you could follow it along.  Maybe they are counting on you to watch the whole class before attempting to sew anything.  But, seriously, who does that?  I love sewing and that isn't appealing, even to me.

In other blog news, I have been inundated with a barrage of spam comments the last month or so.  They are fake comments in Spanish about a diet and they all link back to a Web site.  So, I have had to turn on the CAPTCHA for comments.  I don't like that, but I am tired of sorting through spam. Meh.  I love comments and discussions, so I hope that doesn't stop anyone.
Posted by Cherie at 7:06 PM