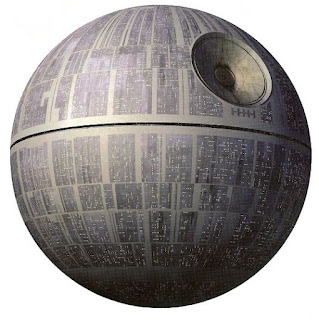 Where I work, the office takes Halloween seriously.  There are departmental contests for who puts on the best Halloween - who decorates best and best costumes.  Past years have been absurdly crazy with the decorations.  They go all out.  There is almost no actual work done that day because there is pride on the line.  There is a committee called "The Fun Committee" that I suspect was formed largely to win Halloween.  I am on that committee and this year our theme is Star Wars.  I am in charge of the Death Star area... which means that I am turning my part of cube-land into the deck of an  Imperial warship and the view out the window will be.... the Death Star.

I was a little mystified about how to create this thing, until I saw this woman's photo. 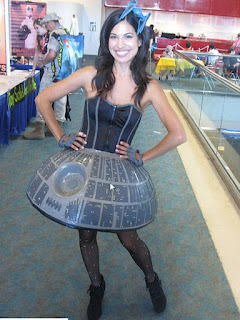 That is totally awesome. Her name is Jennifer and she built that outfit.  She made the skirt out of paper mache and sewed the corset.  She even has a tie-fighter in her hair.  She makes death and evil look so adorable! She calls the outfit Miss Death Star. You can see more pictures of her here (along with a nice interview about the costume) and here is her blog, where she has other amazing costumes.

Thanks to Jennifer, I have a clear plan.  I am going to follow her basic steps for making the skirt and add a few of my own, since I would like mine to have lights and be totally round.  And I don't need to wear it.
So far, I am in the middle of step 2 - paper mache the ever-loving daylights out of it.

Here is the beach ball in process of getting covered. 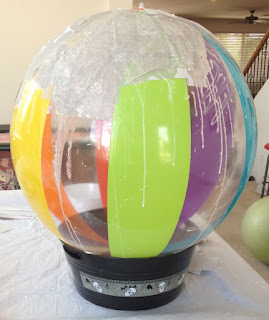 Here my own Death Star after one layer of paper mache. It cracked a little because I decided that I wanted it more inflated AFTER I put on the paper mache.  Note to self: add step 1.5 - make sure the ball is inflated to the level you want before starting to cover it. 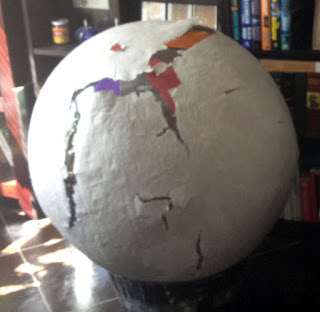 I am not too worried.  The next layer will cover that up.  I probably have at least 4 layers after that one, as well.  Stay tuned for part two!